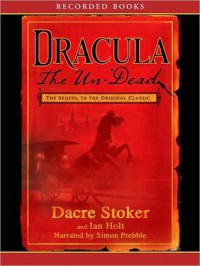 I’m always a little wary when people try to mess with a classic, even moreso when the novel is a direct sequel to it. However, the fact that it is written by Bram Stoker’s great-grandnephew and a Dracula historian lend it a great deal of credibility. The novel is set in 1912, a quarter of a century after Van Helsing and his “band of heroes” defeated Dracula. Front and center in this novel is Quincey Harker, the son of Mina and Jonathan Harker. His parents have kept him in the dark regarding their family history as it pertains to Dracula. When members of the band of heroes start to die off, Mina, who has not aged in the past twenty-five years, realizes that she has to reveal the family history to her son, who has turned away from the career of a lawyer that his father has plotted for him and aspires to be an actor under the tutelage of the great Basarab (who isn’t exactly who he seems to be). The true villain in the novel is revealed not to be Dracula but Countess Bathory, a sixteenth century vampire related to Dracula who is wreaking her revenge on God and humanity. Jonathan and the remaining heroes must once again face the evil that exists, but don’t necessarily know who the villains are.

This was a really enjoyable novel in a lot of ways. It helped that the characters were familiar, with the exception of Jonathan. The novel is exceptionally well-written and professional. There is a logical flow to the progression from the original novel to the sequel. The plot itself was very strong. Having said that, I found a couple of the things that were implemented in here a bit jarring, such as the appearance of Bram Stoker as a character (although this was sufficiently explained) and the transformation of Van Helsing’s character. I liked the inclusion of real-life historical figures into the novel and how they incorporated events like the Jack the Ripper murders into the story. The part with the Titanic at the end was a bit much for me, but for the most part this was well-handled. This novel was definitely a worthy successor to the original, one that I’m sure Bram Stoker would be proud of.