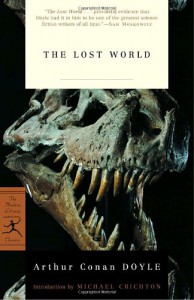 The Lost World is a science fiction novel without much actual science to it, which shouldn’t be that surprising considering that it was written by one of the time’s premier mystery writers. It’s really more an adventure tale than anything, and has quite a bit of interesting elements to it. A group of Englishmen travel to uncharted territory to an area from a bygone era. They travel to South America to find a land that has not only dinosaurs but also a race of prehistoric man. The group included the intrepid reporter looking for adventure, the skeptical professor, the professor who takes life by the horns in hopes of new discovery, and a British lord who is your basic big game hunter type.

There were a lot of aspects that I like about this novel, mostly the characters and the adventure portion of it. It had a real trailblazing feel to it, which I’m sure worked well for the time in which it was written. On the down side, there were some latent racism in the way Doyle handles the “negroes” and natives to the land, even the prehistoric men. There was also a distinct lack of female characters in the novel, which could have added something to it. I also felt that the writing kept the reader at a distance rather than involving them in the action. All together, this novel was enjoyable but not one that resonates.