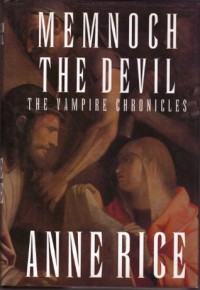 After writing the two best novels in her Vampire Chronicles, Anne Rice puts out a dud in this fifth installment. In this novel, the Devil, Memnoch, recruits Rice’s vampire bad boy Lestat, to fight God. Perhaps the premise was too far reaching for an effective novel, but the novel had too much backstory, and not enough actual story. Too much of the novel focuses on the story of creation and Memnoch’s fall from grace as an angel, who believes his damnation happened because he refused to accept that human suffering should be part of God’s plan. God and the Devil often take human form and get into philosophical debates. Meanwhile, Lestat is just there for the ride, more of a passive observer than an active participant.

This is the point in Anne Rice’s writing of her Vampire Chronicles that she starts to lose her way. Her previous novels were gripping and intriguing. This one really falls flats. The novel is overwritten. She could tell the same story with far fewer words and it would be much tighter. Lestat, normally entertaining and intriguing loses his luster. Not one of Anne Rice’s better novels.