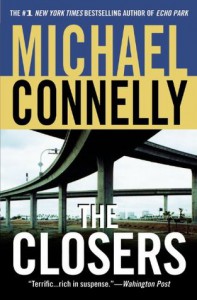 In this novel, Michael Connelly tries to reinvent his character Harry Bosch by having him return to the unsolved crimes division after having retired from the LAPD, finding out that his life isn’t the same after leaving the police force. His first case is an unsolved murder of a 16 year old girl after new DNA evidence links the murder weapon to a suspect in the case. When Bosch begins to dig into the case, he finds many things that don’t add up, including links to hate crimes. What Bosch finds is a myriad of corruption and politics along with some cover-ups. Bosch has to fight the things that made him quit the force in order to solve the case.

Closers is a solid if unspectacular crime fiction novel. Although the case at hand is moderately interesting, the mystery component feels a little lacking. The writing itself feels tired. I thought the author did a fine job with the characterization of the main characters in the novel, but this is a forgettable novel. It has some entertainment value, but is not very memorable.