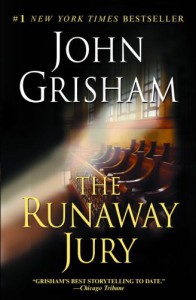 I enjoyed the concept of this novel. The main event is a trial between a shady group of lawyers trying to take down big Tobacco with a lawsuit, and the even shadier lawyers representing the tobacco companies. Nicholas Easter is on the jury and he informs the tobacco group that he could send a verdict their way for a price. Working through his girlfriend, he shows signs that he could hand them a verdict, and manipulates much of the trial.

The concept was good, but this novel more than stretches the realm of believability in many ways. It's just not reasonable to believe that Easter could have done the things that he did. I did enjoy some of the details of the novel, such as the intense selection process and amount of time and money spent analyzing the potential jury members. I have never been a big fan of John Grisham as a writer, and his prose in this novel does nothing to change my mind about it. The best I can say about Grisham is that he sometimes has entertaining plots. I also thought the swerve at the end was good even though I knew it was coming after having watched the movie. This is a mixed bag, but better than most Grisham novels I have read.